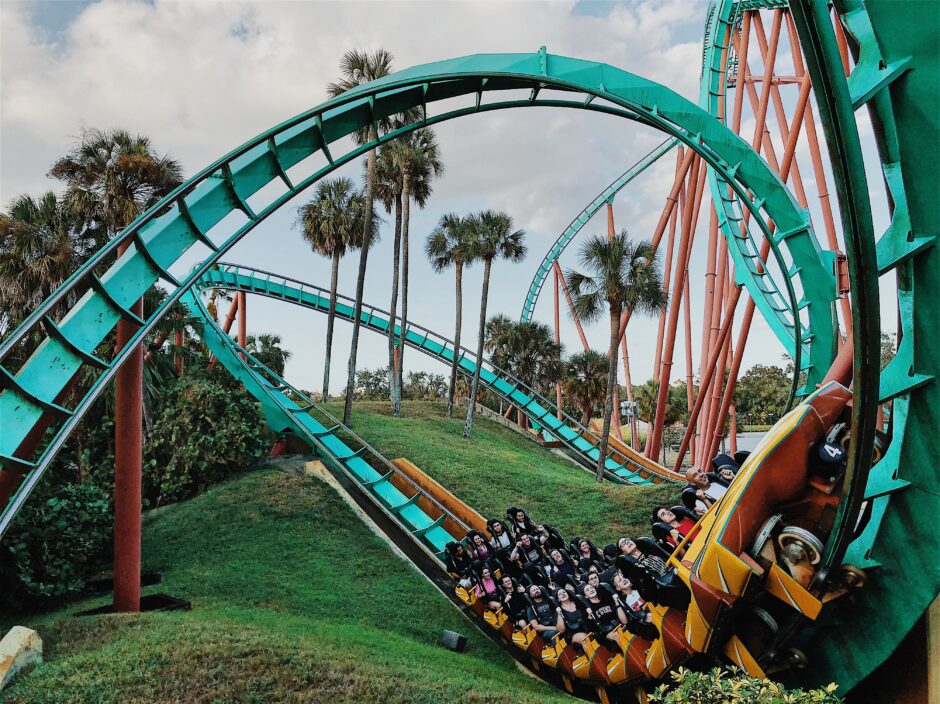 If you’re searching for the fastest rides at Disney World that will make your heart race, keep scrolling for the ultimate list!

Walt Disney World is home to several thrilling attractions. From enormous rollercoasters to scream-worthy drop rides, it’s not difficult to get your adrenaline pumping at the House of Mouse!

If you’re wondering which are the fastest rides at Disney World, I’ve got you covered. This list of rides covers every major thrill ride that will have you holding onto the safety bars for dear life.

So, are you ready to uncover Disney World’s fastest rides?

The 10 Fastest Rides at Disney World

In the section below, I’ll cover the fastest rides at Disney World that range from super-speedy to zippy-but-not-groundbreaking.

I’ll also give them a speed rating between 1 and 10 which will give you an idea of just how fast they are.

Test Track is the fastest ride in Disney World and reaches 65 miles per hour (and 0.6 G-Force!) on its final leg when you erupt out of the building onto an outdoor track.

It opened in 1999 and remains one of the best thrill rides in the Florida parks.

This incredible EPCOT attraction is a motion simulator that puts you in the driver’s seat (or passenger seat!) of a 6-person virtual concept car.

Once you board, you’ll be taken through a circuit of obstacles that “test” your car against heat, crashes, wind, and rain.

It’s completely exhilarating but remains suitable for kiddos who don’t like steep drops or loops.

There are a few sudden stops and flashing lights that may frighten young children, but very few kids will find this ride seriously scary.

Not only is it one of the fastest rides in Disney World, but it truly gets you involved.

Before heading into your car, you’ll be able to design your car to protect it against the elements. At the end of the ride, a screen will tell you how well your car performed under stress!

2. Guardians of the Galaxy Cosmic Rewind

Guardians of the Galaxy Cosmic Rewind is just a few miles-per-hour slower than Test Track, coming in at a whopping 60MPH at top speed.

It’s the park’s very first reverse-launch coaster and is among the largest fully-enclosed coasters in the world!

In addition to being one of the fastest rides at Disney World, it’s also home to a serious feat of Imagineering. The coaster rotates 360 degrees at points, allowing you to take in every aspect of the action.

The rollercoaster takes riders through the Galaxarium which zips through Earth and Xandar on a breathtaking mission packed with flashing lights and projections.

Just before you finish the tour, you’ll be thrown into action helping Rocket, Gamora, Groot, and Star-Lord as they battle intergalactic baddies.

It’s exciting, features incredible drops, and is one of the newest additions to this list of the fastest rides at Disney World!

Oh, and did I mention that it plays an incredible mix of 70s and 80s tracks as you’re whipping around the track?

This is one of the Disney World 2022 attraction additions worth exploring – so don’t miss it!

This is one of the rides at Walt Disney World that operates a Virtual Queueing System.

This means that you’ll need to whip out your My Disney Experience app to get in. You can only head in once a day, so make the most of your ride!

If you’re desperate to skip the virtual queue, you can purchase a Lightning Lane entry.

I must admit, I’ll always have a soft spot for the Rock ‘n’ Roller Coaster Starring Aerosmith.

Although I’ll miss the Paris version of this ride (which is now defunct and rethemed – cry!), I’m pleased to see that Disney has kept this iconic coaster running in its original form.

Now, it’s certainly one of the fastest rides at Disney World, coming in at a rip-roaring 57MPH.

Along with the amazing soundtrack that gets your adrenaline pumping, you’ll be treated to wonderful Imagineering feats through picture-perfect backlighting.

If you’re planning to visit this ride, you’ll either want to book a Lightning Lane slot through Genie+ or attempt to hit it at park opening. It gets busier as the day wears on, so it’s worth visiting as soon as you can to avoid the queues (which can get immense).

Expedition Everest is one of the most popular thrill rides at Disney World. And it also happens to be one of the fastest at 50MPH!

This Animal Kingdom ride takes you through the peaks of the Himalayas on a speedy train that’s trying to escape the infamous Yeti.

The design of this ride is meant to mimic the beauty of Tibet, and it gets seriously exciting when you approach the broken and twisted track after a major ascent.

From there, you’ll career backward into darkness (which I must admit – I hate!) before encountering an enormous drop that finishes the ride.

As you head through the breathtaking twists and turns, you’ll get amazing views of the parks which is a major bonus.

Although children that are over 112cm can ride this attraction, the theming and loud noises can make this quite scary for little ones.

So, ride with caution!

This is another super-popular ride at Walt Disney World that you’ll want to use Genie+ for.

If you’re happy to head in as a single rider, you can save a bunch of time.

Alternatively, hit it at rope drop!

Next on my list of the fastest rides at Disney World, we have Slinky Dog Dash!

This ride is tucked away in Toy Story Land at Disney’s Hollywood Studios and reaches maximum speeds of 40MPH.

It’s considerably slower than the previous attractions I’ve mentioned, but it still feels like a thrill ride thanks to the twists, turns, and small drops on the track.

The theming is adorable, and the coaster offers wonderful views over Toy Story Land and Hollywood Studios as you zip around the track.

I’d say that this was one of the fastest rides in Disney World that’s great for kids.

The height requirements are reasonable, the drops aren’t shocking, and it contains just enough zooms and hill climbs to keep kids interested.

It’s a tad short at 1 minute 45 seconds (considering the sometimes-very-long queue time), but it’s still worth checking out.

This is one of the quick rides at Disney World that’s worth riding at night as Toy Story Land looks gorgeous.

It may surprise you to see Splash Mountain so high on this list of the fastest rides at Disney World.

But it reaches an incredible speed of 40MPH as you head down the final flume.

This ride follows the story of Br’er Rabbit, who’s searching for the famous “laughing place”.

Along the way, you’ll run into Br’er Bear and Br’er Fox who aren’t quite as friendly.

It’s a very aesthetic (though quite old-fashioned) ride that features over 100 animatronics that sing classics like “Zip-a-Dee-Doo-Dah”.

Most of the ride is tame, but the iconic drop at the end is 5-stories high (52 feet) and can get riders quite wet.

There are 950,000 gallons of water to contend with throughout the ride, so it comes as no surprise!

If your kiddos are too short to head on this ride, it’s worth taking them to the Laughin’ Place which is located near the ride’s exit.

It’s essentially a cute playground that helps tykes burn off a bit of excess energy.

Considering how fast the Twilight Zone Tower of Terror feels when it’s plunging down, I was shocked when I figured out that it wasn’t the fastest ride at Disney World.

This ride is a Disney mainstay, and it’s located at Disney’s Hollywood Studios.

On the ride, you’ll step inside the spooky Hollywood Tower Hotel which is creepy from the word “GO”.

As you walk through the old lobby, you’ll hear a story about a few guests who were riding the elevator when a storm hit the building.

And they were never seen again.

This iconic ride drops you at 40MPH through an “elevator shaft” which is technically an enclosed space inside the Tower’s construction.

Both the theming and the dropping motion will probably frighten young children, so I don’t recommend subjecting them to this unless they’re very sure of themselves.

If you’re an adult with a stomach of steel, this is one of the fast rides at Disney World that’s worth checking out.

During the ride, you’ll head into an abandoned 1850s mine shaft, pass through a cavern packed with gems, and try your hand at dodging dynamite at speed!

As it’s a slightly lighter coaster without overhead restraints, it feels seriously quick!

In my opinion, this is a must-do ride if you’re visiting the Magic Kingdom as it runs for a decent 3 minutes and is a lot of fun.

If you’re happy to ride this at the start of the day, the queues are basically non-existent.

Otherwise, you might want to grab a Lightning Lane entry to save time.

Seven Dwarfs Mine Train is one of the newer kids on the block, but it’s a speedy coaster that’s worth mentioning on this list of the fastest rides at Disney World.

It’s a gorgeous dark ride with lovely animatronics (that are very smooth), it lets smaller kids ride, and is immersive.

It moves at 34MPH, but I wouldn’t say that it’s the best rollercoaster at Disney World.

This is mainly because the drops and twists aren’t overly impressive.

But even so, it’s a wonderful ride that’s worth hitting at rope drop or purchasing a Lightning Lane entry.

The final spot on my list of the fastest rides at Disney World is Space Mountain.

It may not be the quickest coaster in the parks, but it’s one of the most historic!

This ride takes place entirely in the dark, which makes every single loop, twist, and turn at 27MPH feel incredibly fast.

You’ll have absolutely no perception of anything going on around you either as you’ve essentially lost part of your vision and depth perception.

So, it truly feels like you’re traveling at lightning speed.

Oh, and it’s an indoor coaster with a smooth track, which also adds to how fast it feels!

I don’t recommend buying a Lightning Lane entry for this. It just isn’t necessary as the queue moves quite quickly.

What is the fastest ride at Disney World?

The fastest ride at Disney World is Test Track which runs at a top speed of 65MPH.

Are Disney World rollercoasters the fastest in the world?

Rock ‘n’ Roller Coaster measures up to the fastest roller coasters in the world, but it doesn’t beat the ridiculous Formula Rossa in Abu Dhabi.

It runs at an incredible 149MPH and will probably make you sick.

May the force be with you if you’re brave enough to try it!

Are there any other fast rides at Disney World apart from roller coasters?

Yup – you’ve got the Tower of Terror, Splash Mountain, and Test Track!

Which fast Disney World rides are best for kids?

I’d say that Slinky Dog Dash is the best ride for young children as it’s slightly slower and has wonderful Toy Story theming.

There you have it: a detailed list of the fastest rides at Disney World!

Have you ever tried any of these adrenaline-inducing rides on a Disney World vacation? I’d love to hear about your experience in the comments below.

If you want to learn more about Walt Disney World, check out these related posts. 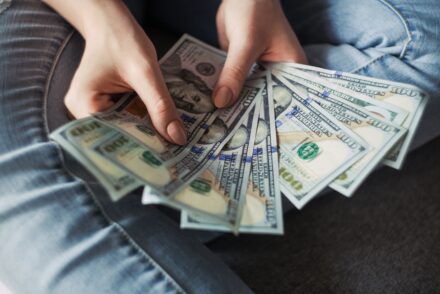 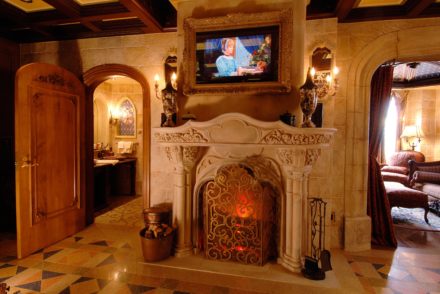 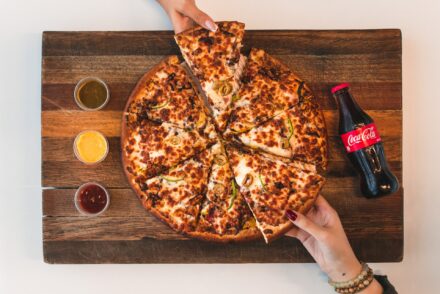 Can You Get Pizza Delivery at Disney Resorts?